Persevere And You Will Conquer: Josie's Story 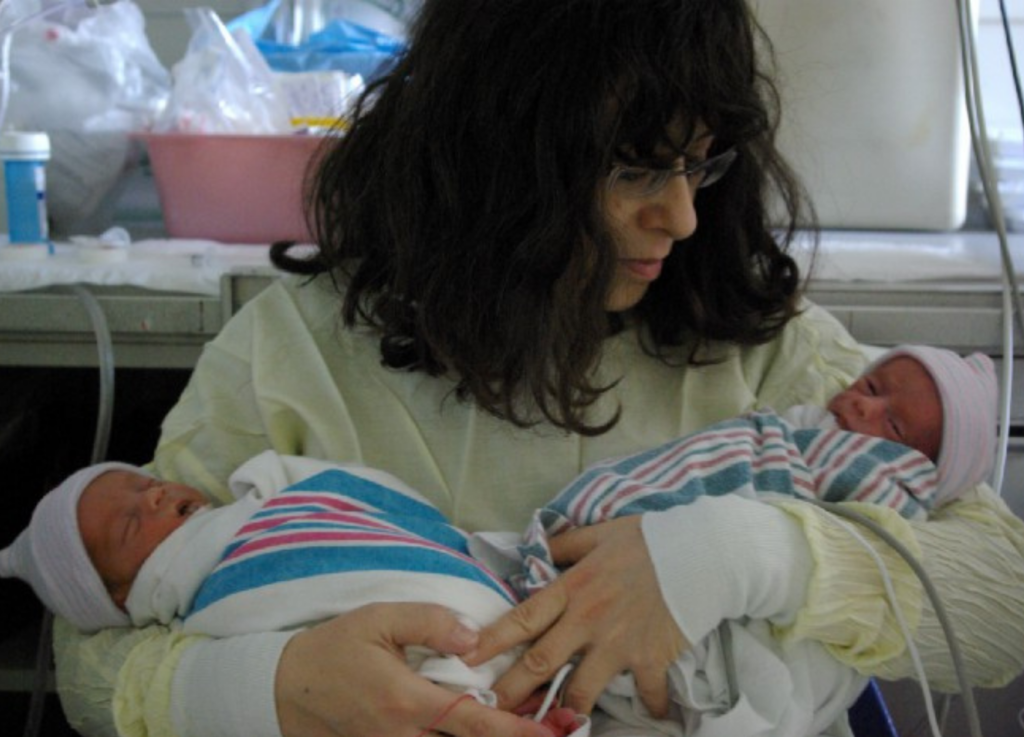 In the autumn of 2010, when I was pregnant with twins, my dear husband Larry bought me a copy of “Breastfeeding Your Baby,” by Sheila Kitzinger. The book, originally published in 1989, is filled with pictures of half-dressed Earth Mother-y women with long flowing hair, large bosoms and serene expressions, peacefully nursing one baby, or twins together, or a young baby and an older child at the same time. I’m not sure why, but I just couldn’t read that book. I was scared that I wouldn’t be able to breast-feed even one baby, let alone twins. A friend of mine had told me that her baby on her breast had felt “like a piranha latched onto her chest,” and somehow the image stuck in my head.

My twin babies are now one year old, and I’m still breast-feeding both of them together in the mornings, one on each breast. It’s one of the most nurturing and comforting feelings I have ever known.

perseverance, because when they were born, eight weeks early, they weren’t even able to suck. I was in my thirtieth week of pregnancy when I developed preeclampsia, perilously high blood pressure that occurs more commonly in older mothers with twin pregnancies. I spent a week in New York’s Roosevelt Hospital before going into labor early and giving birth by emergency Caesarian to two tiny babies, a girl and a boy, at 31-and-a-half weeks’ gestation. I had but a moment to register their arrival before they were whisked away to the Neonatal Intensive Care Unit (NICU). I spent the next 26 hours in the recovery room, doped up on pain drugs and anti-seizure medication, and it wasn’t until the following evening that I saw my babies again.

When I looked at my little daughter in her incubator, I cried. She was so small and thin — just two pounds seven ounces, or 1.1 kilograms. But she was strong, breathing without assistance, with an operatic set of lungs. My son was bigger at 3 pounds 12 ounces, but neither of them had developed their sucking reflex. They were fed intravenously at first, through a catheter in the umbilical cord, and also with tiny quantities of pumped breast milk delivered directly into their stomachs with a narrow, flexible gavage tube inserted into their nose or mouth.

I had barely emerged from my medicated stupor when a nurse trundled in a breast-pump and instructed me to attach the two plastic flanges to my breasts, plug the tubes into the pump, and turn the suction on. I’ve never felt quite as ridiculous as I did with those two shields, like miniature trumpets, stuck to my chest, the pump whooshing and pulling. I could hardly believe it when I saw a few tiny drops of colostrum — the high-protein, antibody-filled early milk — emerge. From that day, I was pumping every two-and-a-half to three hours, around the clock, to provide milk for my two teeny preemies.

At first, the amounts I produced were minuscule — an ounce at a time, sometimes two ounces — but, encouraged by the nurses in the NICU and the strong support of my husband, I kept going. I read leaflets in the NICU’s lactation room about the benefits of breast-feeding — the brain-building proteins in the milk, the antibodies, the bonding with the baby. As a forty-something mother of premature twins, my output was never exactly lavish — I always had to supplement with formula — but I did my best to increase the amount of milk I produced, drinking tasteless herbal teas and pumping at unearthly hours while visualizing myself as a floating fertility goddess, milk gushing from my breasts. When that had no effect on my productivity, I turned on the TV and watched Bridezillas.

When my twins were about three weeks old — 34 weeks’ gestational age — the nurses decided that my son was ready to breast-feed. My daughter, however, had developed a potentially fatal intestinal condition — Stage 1 NEC, or necrotizing enterocolitis, and was back on intravenous feeding and antibiotics. The first time I tried to feed my baby boy — and the second and the third time — he fell asleep. But when he did latch on and suck, I felt as if I was nestled in a cocoon of love amid the loudly beeping monitors, bright fluorescent lights, and crying babies. I was mesmerized by his little face as I watched him quietly feeding, and felt as if my body had been perfectly designed for this role.

My reveries were often interrupted, alas, as it was during feeding that my son would have episodes of bradycardia, a slowing of the heart-beat common among preemies. Preemie babies are often unable coordinate their suck, swallow, breathe, response, so that his peaceful look would sometimes turn a little too dazed, and before I had time to register the change — BEEP, BEEP, BEEP — the heart monitor would sound the alarm. I’d sit him up, pat his back, say his name loudly, watch the screen as his heart rate rose, and start all over again.

After a week on intravenous antibiotics, my daughter recovered and was slowly reintroduced to pumped breast milk, initially through a gavage tube and then with a bottle. She, too, had regular bradycardia episodes, and breast-feeding her was near-impossible: if she did latch on, which was rare, she would suck for a second or two before falling asleep.

It was very tough to keep on trying, but two wonderful people spurred me on: first, a warm-hearted, veteran NICU nurse who pushed me to continue, citing her school motto, “persevere and you will conquer,” a quote from Letters written by the Earl of Chesterfield to his son, published in 1876. The second was Freda Rosenfeld, a well-known lactation consultant profiled in the New York Times as “the Breast-Whisperer.” When Freda examined my baby girl, she saw that her jaw muscles were simply too weak to suck effectively. She gave me jaw-strengthening exercises to do with my little baby, to use a nipple shield, and to drip milk into the shield through a gavage tube taped to my breast — to assure her that the milk would flow if she sucked.

My twins spent eight weeks in the NICU, released only when they had both had five brady-free days. Once home, we fed them every three hours, alternating breast and bottled formula. Time after time, I stuck that gavage tube to my chest with duct tape, hoping that my daughter would learn how to nurse. Often she cried, and I took deep breaths, said, “persevere and you will conquer,” gave her a bottle, and tried nursing again. Several weeks after her arrival home, she started sucking for herself quite naturally.

My twins are one year old now, and I have breast-fed them both for all that time. Even though they’re also drinking cow’s milk now and eating a full range of foods, I still breast-feed them together in the mornings, for the joy of it or just from habit. Sometimes they hold hands. Sometimes they poke each other in the eye. As I look at them lovingly, I think of the Biblical Sarah, advanced in years, who gave birth to her son Isaac and rejoiced, saying, “Who would have said to Abraham, that Sarah would suckle children?”

Looking For Something Else?

***The information provided on our website is intended solely for general educational and informational purposes only. It is neither intended nor implied to be a substitute for professional medical advice. Always seek the advice of your physician for any questions you may have regarding your or your child’s medical condition. Never disregard professional medical advice or delay in seeking it because of something you have received in this information.***

Looking for the latest breastfeeding scoop? Sign up for our newsletter to have the happenings at MPD sent directly to your inbox!
© 2022 My Pure Delivery. All Rights Reserved
We accept: